Cyclone Vayu LIVE: Gujarat is on alert after Cyclone Vayu, which intensified into a severe cyclonic storm on Tuesday, moves northwards. The India Meteorological Department (IMD) said the cyclone is likely to hit the Gujarat coast on the morning of June 13.

“It is very likely to move nearly northward and cross the Gujarat coast between Porbandar and Mahuva around Veraval and Diu region as a severe cyclonic storm with wind speed 110-120 kilometres per hour gusting to 135 kilometres per hour during early morning of June 13,” it said.

Measures to Take During/After Cyclone (if indoors)
• Switch off electrical mains, gas supply.
• Keep doors and windows shut.
• If your house is unsafe, leave early before the onset of the cyclone.
• Listen to a radio/transistor.
• Drink boiled/chlorinated water.
• Rely only on official warnings.

The National Disaster Management Authority issued advisories to the people, telling them of the dos and donts in face of a cyclone. 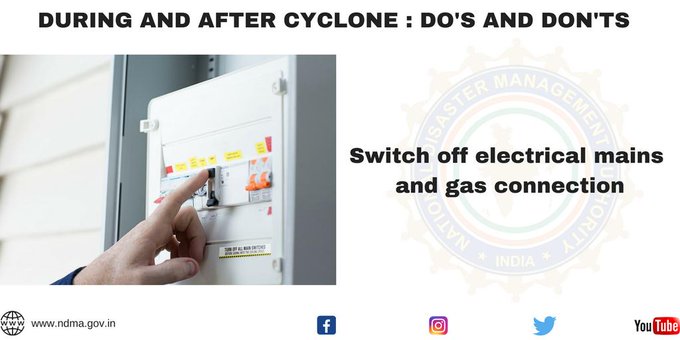