I prepared well, but never felt I have a point to prove: Shakib 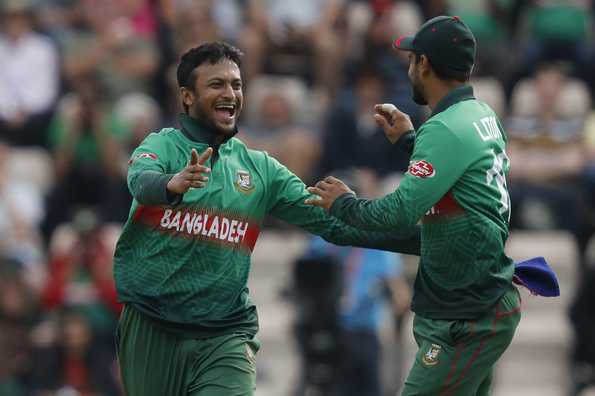 "The work I have done with my fitness for one or one-and-a-half months has been helping me." © AFP

Bangladesh all-rounder Shakib al Hasan scripted another Bangladesh win after a spectacular outing against Afghanistan, showing just why he is the number one all-rounder in ODIs. From the opening game of the World Cup, Shakib has been in scintillating form with the bat, overshadowing his bowling exploits as a result. However, against Afghanistan, he came up with an all-round performance to keep his side's World Cup campaign alive.

After scoring a laborious half-century to help take Bangladesh to 262 for 7, he returned a five-wicket haul, and in the process entered history books by becoming just the second cricketer after Yuvraj Singh to score a fifty and pick a five-fer in a World Cup ODI.

Signs of the wicket having something for the spinners were there early given how Afghanistan's spinners had bowled against India. The wicket offered more turn and instead of approaching the game with the idea of just tying batsmen down, Shakib forced them to play and err, finishing with a career-best 5 for 29 in his ten overs.

"Five wickets obviously was special," Shakib said on Monday (June 24). "Look we are that type of spinners who, in our country as well, need some help. I think today's wicket had the most help. It was needed and it was important from my perspective and from team's. Luckily I have been doing this and very happy with the way this tournament is going so far.

"I did prepare well but I never felt that I have a point to prove," he said. "I did everything I could do before the World Cup started for my preparation. It has been helping me a lot. I don't rank my performance at all, but it is satisfying when I am contributing with both bat and ball. It gives me more satisfaction than contributing in just one sector," he said.

The way he batted suggested that he is enjoying the challenge at No.3, and what is more encouraging is that he is trying to give his best shot in trying times. When Afghanistan spinners were making things tough, Shakib did not lose his mind, and instead batted with patience, trying to ensure a ticking scoreboard with ones and twos. The only time he felt out of place was when a miscued shot against Gulabdin Naib landed in no-man's land around the point region, when he tried to work a length delivery into the leg-side.

His decision to take the review was also spot on when Rashid Khan appealed against him for an lbw when he was on 26, but what proved his maturity is that he never looked to go after the bowlers despite them having him under pressure by not letting him score runs at will.

"The work I have done with my fitness for one or one-and-a-half months has been helping me. This fitness helps me take tough decisions in difficult conditions and situations," said Shakib. "I am able to take those tough decisions because of that fitness. I think it's a big reason. I can't think of any other reasons other, because I have changed nothing other than that. But the work I have done on my fitness is helping me a lot," he said.

Shakib also added that he does not believe that Bangladesh are a one-man army, stating that they have to win through a combined team effort if they are to go far in the tournament.